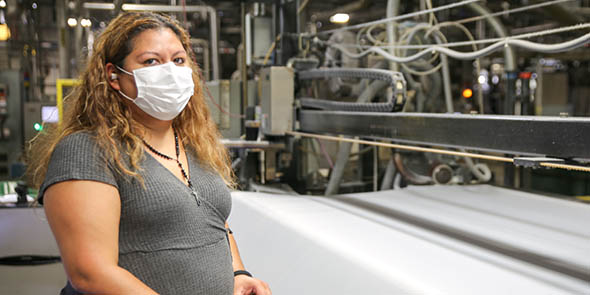 Jul 31, 2020 Comments Off on Rhina Quintanilla, Shawmut Corp. Uncategorized  Like

Rhina Quintanilla, 40, has been working in the U.S. textile industry for half of her life.

Over the past 20 years she has worked her way up the ladder to her current position as a Vision Technician at Shawmut Corp. In the quality control department, Rhina uses Shelton automated inspection technology to photograph fabric on the production line to assess its quality.

A mother of two and an immigrant from El Salvador, Rhina has weathered many ups and downs in her life, but the jobs she has held in textile factories over those years have given her not only a means to make a living but also new skills and training on advanced technologies that help the industry innovate and compete in a global world.

Rhina, along with tens of thousands of textile workers, has helped drive the U.S. industry through one of its darkest chapters in history—the COVID-19 pandemic.

“I have a sister that works in the hospital, and she tells me about how they didn’t have a lot of protective equipment; but now it’s coming in, and they’re glad that’s being produced and given to them. She’s a phlebotomist here in Burlington [N.C.]. So to me, it’s personal,” Rhina says.

She has been confronted with many challenges during the health crisis, including a weeklong furlough, before being called back in to ramp up production on fabrics for medical gowns.

“Personally, we had to change our mindset and the way we were used to doing things to accommodate in a [fast] pace producing new products,” she says.

Shawmut traditionally produces headliner composites, technical textiles and lamination, including in the automotive division of Shawmut where Rhina works.

Being part of a larger effort by the industry to retool production lines and pivot to PPE production to address the severe shortage of critical PPE items like gowns, face masks, and isolation curtains has been rewarding for Rhina.

“We were given a lot of good tools and already had some ourselves to make that product work as good as it’s working now. And it means that the people who need it are getting it and having it when they need it,” she says.

The textile industry runs through Rhina’s family and through her own personal story with her husband.

“I did not go to school for textiles; but because those were the jobs that were available as I was reaching the age of adulthood, that’s what was around, textiles. And I just feel like I’ve been blessed to have been given the opportunity with Shawmut to grow and learn a lot more about textiles, different types of fabrics.” Rhina adds.

Her father worked at Copland Fabrics, also based in Burlington, North Carolina, for 15 years, and Rhina says she met her husband, Juan, in Burlington as well.

Juan, who moved to North Carolina from El Salvador 13 years ago, also has roots in the U.S. textile industry, first working for Cortina Fabrics and now working at the same company—Shawmut—as Rhina.

If [we] produce material here, that’s helping people all across the United States. If there’s more places that would do this, they could, in cases like this pandemic, have faster access to the materials that they need.

Rhina sees her role in making PPE and automotive products in America in this way:

“I feel that if [we] produce material here, that’s helping people all across the United States. If there’s more places that would do this, they could, in cases like this pandemic, have faster access to the materials that they need.”

Domestic production is important because it provides “security, knowing that we’re doing something good for many people. It’s very family-like here. They always let us know what’s going on and it feels very family oriented,” she says.

As lawmakers on Capitol Hill introduce bills to expand domestic PPE production; reduce our country’s overreliance on foreign-made goods, particularly from China; and solidify production in the U.S., it is people like Rhina Quintanilla who are working every day to make medical-related textiles to help frontline workers.

Rhina says she has learned that textiles is a “difficult business that can disappear quickly.”

“And from seeing other places, jobs can just kind of vanish or be sent overseas,” she adds.

That is why it is important to her during the pandemic in particular to show members of Congress and the public how flexible, efficient and important the industry is to not only PPE production but a whole host of other critical textiles, including the automotive business.

She also says domestic production of PPE is critical to keep the supply chain prepared for the future.

“We live in a big country where a lot of this stuff is needed and used, and to have it produced here is much needed,” she says.

Her message to Capitol Hill is simple and direct:

“What we do here right now is being produced here, and I feel it’s important because like I said, for the gown business, we have it, it’s ready and it’s accessible faster than having to wait for it to get here.” 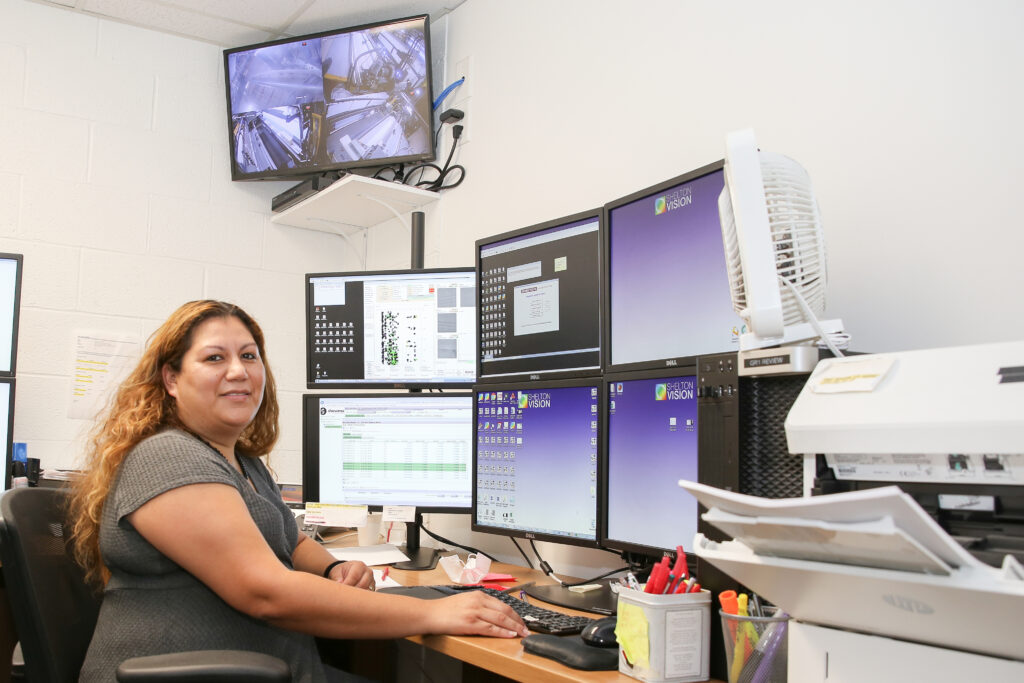 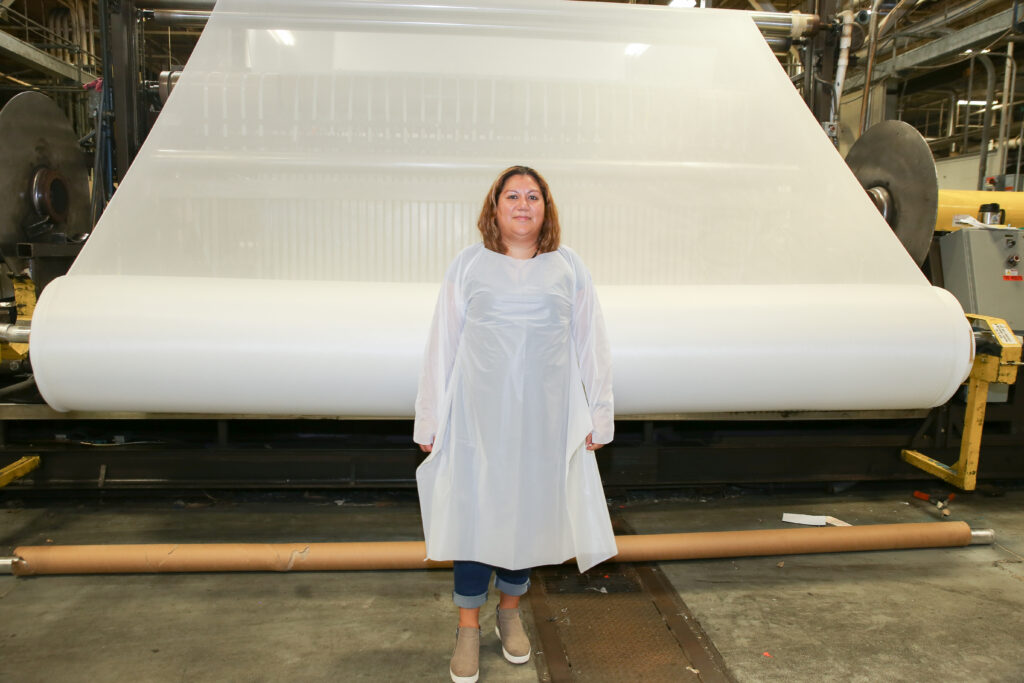 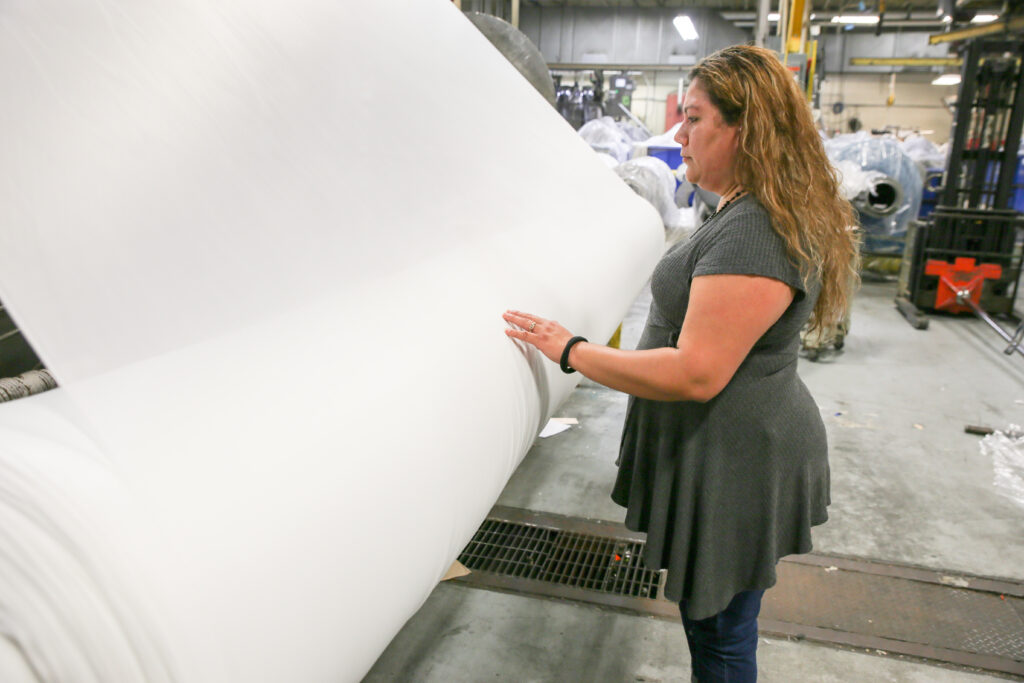