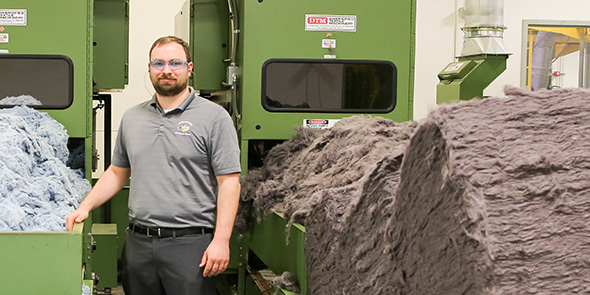 Jul 31, 2020 Comments Off on Stephen Comer, Glen Raven Uncategorized  Like

Stephen Comer, 31, joined Glen Raven when he was obtaining higher education degrees, never thinking his career would cross paths with the company at a later date. But after earning his undergraduate and master’s degrees in history, he ditched the idea of seeking a Ph.D. to return full time to a company and an industry in which he respected and saw a great future.

Glen Raven had been good to Stephen’s family and the small North Carolina community in which he grew up. His first stint at the company as a material handler in 2013 opened his eyes to the possibilities of a career at a global textile company. His aunt and uncle met at the company and have each worked there about two decades, and Stephen recalls he was often able to visit his aunt’s workplace when he was a pre-teen.

“I realized manufacturing in the U.S. wasn’t what it once was, but I knew that Glen Raven was strong and was continuing to grow,” he says. “And I knew the company had been around a long time, was a tight-knit, family-run company and a lot of families worked there. So based on that, I felt like it was a strong, employee-focused company to work for.”

Stephen returned to Glen Raven four years ago, starting as a lab analyst before moving into his current role as manufacturing services coordinator last year. He oversees new hire orientation and on-the-job training, in addition to managing a large portion of the safety program.

When the COVID-19 pandemic hit, Glen Raven’s Burlington plant shifted its primary production focus from its highly advanced performance fabrics for upholstery, awnings, shade and marine applications to its proprietary synthetic fiber mix for its arc-flash, flame-retardant fabric. Apparel containing this fabric is worn by utility and electrical workers that keep essential businesses, including hospitals and healthcare facilities running.

[COVID-19] really shows the glaring need for textiles in the U.S. – not just for PPE, but also in general clothing and textiles. We use textiles in a number of different ways, and it’s important that we have fast access to those products.

“As seen during the COVID-19 crisis, it’s very important to have textiles here in the U.S., so that we have supply lines and end products available in critical times,” he says. “American quality is good quality. I know it might cost more to make things here in the U.S. but we need it to be available here, especially in times of need like today during the crisis. It really shows the glaring need for textiles in the U.S. – not just for PPE, but also in general clothing and textiles. We use textiles in a number of different ways, and it’s important that we have fast access to those products.”

The industry is proving its adaptability and importance during the pandemic – something it has shown time and again during our nation’s times of need.

“We have a really adaptable group that’s used to being flexible and responsive. That culture is already established, especially that safety culture, so I think it made it a fairly seamless process,” Stephen says.

Stephen notes he is honored to work in an industry that has answered our nation’s call and provides basic, high-quality essentials to its citizens.

“Many people don’t know a whole lot about textiles, but I’m proud to talk about what I do and how important it is,” he says. “Obviously, my career is a lot shorter than some, but I’ve seen how we’ve grown and pivoted and changed in just the short amount of time that I’ve been here, and seen how resilient the industry is.”

Domestic production of textiles is imperative, as the critical need for PPE supply exposed during the crisis. And Stephen says he hopes those decisionmakers who hold the industry’s future in their hands have taken notice.

“I guess [the industry] has not gotten the credit it deserves, based on the fact a lot of textiles moved out of the U.S.,” he says. “But with this crisis, having things made here has proven how important it is.”

Contact your lawmakersSend a letter in support of American PPE Production